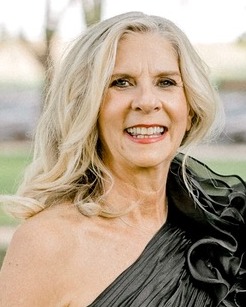 April DeAnn Roark, 60, of Ft. Worth Texas, went home to Jesus on Saturday, December 10, 2022 after a fierce and courageous battle with cancer.

April was born on August, 26, 1962 to Foy and Kay Graves in Hobbs, New Mexico.  April graduated from Lubbock’s Monterey High School and went on to attend Texas Tech University, where she became a loyal Red Raider, earning  three degrees: a Bachelor’s and Master’s in Science and a Juris Doctorate (law degree).

Before attending law school, April taught high school English at Levelland High School for several years while also coaching the girls’ basketball team. April loved her students – it was a joy for her to be in the classroom and teaching.

After graduating law school, April joined Strasburger & Price, LLP where she became a commercial litigator, trying cases litigated in state and federal courts in Texas. Once April’s two children were born, April stepped out of the courtroom and back into the classroom, joining Texas Tech’s School of Law as a teaching fellow. April went on to hold various roles across the legal profession, most recently with Foley Gardere where she was the firm’s Professional Responsibility Counsel and led the firm’s Conflicts division. This fall, April made her way back to the classroom again, teaching real-estate and business law at Texas Christian University. April truly loved teaching and had such a gift of connecting with her students and helping them love to learn.

April met her husband, Jason Roark while attending Texas Tech University. They married in 1989 and went on to have two children, Jacob Lee and Kathryn (Katy) DeAnn. They raised their two children in Lubbock, Texas and attended Church on the Rock. April was an active member in a number of local and global mission organizations, leading a life of service. April led or attended a number of mission trips to Guatemala, Haiti, India, Kenya, Nicaragua, and Thailand where she helped to train teachers, spoke at women’s conferences, and learned about the needs of those around the world.  April and her husband also partnered with Christian Ministries in Africa (Kenya) to help build schools and medical clinics. April served on the Red Light Rescue Panel of SOS International, an organization helping to stop human trafficking, especially of young girls. In Lubbock, April and her daughter Katy, continued April’s work of serving others and co-founded the charity Prom Queen in 2017. Prom Queen’s mission is two-fold: encouraging girls to embrace their self-worth and to provide prom dresses to girls who would otherwise not be able to afford one. Prom Queen still operates today through Lubbock Christian High School in partnership with the Dream Center. April also spent time serving at-risk young women at the Juvenile Justice Center in Lubbock.  April and Jason served as co-chairs to the religious council for the Juvenile Justice Center.

April truly lived the verse Luke 12:48, To whom much is given, much will be required. Just before being diagnosed with cancer, April and Jason had completed the requirements for becoming foster parents, a role April would have thrived in. April wanted to care for and love children in need.

April was also a creative and passionate entrepreneur. She launched several businesses: a solo photography business, an online estates and trust business and partnered with her husband in his ranching and real-estate business. April also co- founded Rush Delivery with her daughter. Her creativity and gifts were an inspiration to many.

April is preceded in death by her father, Foy Graves. She is survived by her husband, Jason, their two children, Jacob (Kati) and Katy (Grant), her mother Kay Graves, her sister Karee Daniel and numerous in-laws, cousins, nieces and nephews. April was one of the kindest and most loving people to grace this earth. She had a positive and lasting impact and she is missed more than words can say.

Services will be held on Friday, December 16, 2022 at 10 am at the Robert Carr Chapel on the campus of Texas Christian University (2855 S. University Dr. Ft. Worth, TX 76129). Flowers may be sent to Hawkins Family Funeral Home 2711 Jacksboro Hwy Ft. Worth, TX 76114 and will be moved to the chapel.  Reception to follow service: Mira Vista Country Club, 6600 Mira Vista Blvd, Fort Worth, TX 76132
To order memorial trees or send flowers to the family in memory of April DeAnn Roark, please visit our flower store.