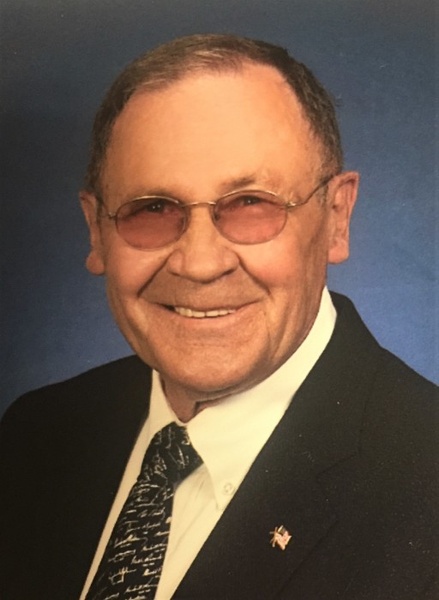 James "Jim" Phillip Bradshaw, 87, retired from the U.S. Air Force as Staff Sergeant, a loving husband, father, grandfather, and brother went to be with the Lord March 29th, 2020 in Decatur, Texas.

A family-only graveside service will be held Saturday, April 4th, 2020 at Ash Creek Cemetery. Family and friends are welcome to come 9am to 6pm on Friday, April 3rd, 2020 at Hawkins Funeral Home in Bridgeport, Texas as a come and go visitation.

The ministers who will be conducting the service are Dr. David Lowrie and Gerre Joiner.

Jim was born on December 17, 1932 in Shawnee, Oklahoma he was the oldest son of Enos David Bradshaw and Naomi Lavina Bymaster.

After a short time at college, Jim decided to join the United States Air Force.  He did his boot camp in San Antonio, Texas and further training in aircraft maintenance in Wichita Falls, Texas.  He was stationed in England for 3 years where his tours of duty took him to 22 different countries.  He was honorably discharged in November 1957. With a depressed economy, he rejoined the Air Force on April 17, 1958. After being discharged from the military, he married Sherri an old acquaintance from Shawnee, Oklahoma. With his new wife, they were stationed at Holloman Air Force Base in Alamogordo, New Mexico.  After 9 ½ years of service, he left the military on June 29, 1962. He went to work for Land-Air who worked on the High-Speed Test Track for the Department of Defense in Alamogordo.  In 1967, with his family, he moved to Mineral Wells, Texas where he worked for Southern Airways on helicopters.  After working nights for several years, he decided it was time to own his own business.  He owned a gas station for short time and then decided to fulfill a dream and open a hamburger restaurant.  Sonic Drive-Inn was started in Shawnee, a place he knew well, so he went into training and became a partner and full time Manager of the first Sonic in Lewisville, Texas.  In 1972 the entire family moved to Lewisville.  After making it a success, he realized the strain on family and church life and decided to train as a Mud-Engineer for the oilfield.  He went to work for IMCO Services located in Bridgeport, Texas. The family then relocated for the last time, to Decatur, Texas in 1977.  He was awarded Top Engineer during his tenure and ended up taking early retirement in June 1986.  He enjoyed odd jobs in retirement to keep busy. On May 29th, 1999 he was united in marriage to Margie (Hargrove) Morris and remained happily married for nearly 21 years.

Jim committed his life to Christ when he was 9 years old. He loved the Lord and was a faithful servant, husband and father.  While in New Mexico he helped grow a small church.  He ensured his children attended and participated in church activities.  He was a faithful member of First Baptist Church in Decatur, Texas.  Jim’s acts of service were often unseen.  When he owned the Sonic, he ministered to his young employees.  He volunteered at the Hospital with his wife Margie.  Jim would go to the church on Sunday mornings and make coffee before anyone else arrived.  He always did it with a HAPPY HEART!!  He loved to joke around and had a great sense of humor.  You knew you were loved if he gave you a nickname, kidded you about something or thumped you with his finger (anyone who knew him, knows what we are talking about).  His Love of God and his quiet servant’s heart are his family’s legacy. His family meant everything to him and gave him the nickname “PaPa” which rang loud by everyone anytime they were by him or on the phone with him. Some of his favorite things were good food, New Mexico mountains, and of course P-38 airplanes. His joy for life, humor, and love were our blessing.

He is pre-deceased by his parents, his first wife Sherri Bea Smith-Bradshaw, his brother Dean Bradshaw and his son Gary Morris.

To order memorial trees or send flowers to the family in memory of James "Jim" Phillip Bradshaw, please visit our flower store.
Send a Sympathy Card
Send a Sympathy Gift