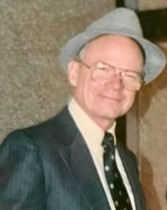 Fort Worth ~ Henry Brantlin Angus, 89, a retired corporate attorney for General Dynamics and Bell Helicopter, family man and U.S. Army Veteran went to be with our Lord Monday, October 14, 2019 in Fort Worth, Texas.

Henry was born on December 8, 1929, to Henry Dane Angus and Mary (Faust) Angus in Memphis, Tennessee.  He was a very loving and caring person, who cared very much for his family. He enjoyed playing bridge and watching his favorite sports teams the Cowboys and Rangers.  He was a man of precision and well organized in all he did from work to home. He worked hard and cared for his family to provide for them.  He was a simple man who enjoyed his time with family and playing tennis with his friends.  He was a corporate attorney for Bell Helicopter and General Dynamics which is where he retired from after decades of work.

He was preceded in death by his parents Henry & Mary Angus.

In lieu of flowers the family has requested for donations to made to 22 Kill Charity an organization helping Veterans. www.22kill.com